Is the air quality in China good?

Usually, the air quality in China is just moderate. However, past patterns and future projections of air quality in China show that the country faces intense air pollution throughout the year, and on average, it can be concluded that air quality is unhealthy with a dominant pollutant of PM2.5. IQAir reports that PM2.5 concentrations in China is 6.9 times higher than standards set by WHO (IQAir, 2021).

Though the country has the highest population in the world, it has been one of the slower acting countries in terms of addressing air pollution concerns. Air pollution was not even considered up until the 2008 Beijing Olympics when several global actors expressed concern about athletes’ health and the implications of air pollution from long-term exposure during the Olympics. It was then that the country started its first wave of actions to address air pollution.

Before the game, the state actors took strict measures to address air quality concerns as the country was on spotlight. Some of their actions included phasing out approximately 300,000 highly polluting vehicles, halting construction projects, shutting down of industrial activities, power plants, etc.

These changes brought immediate results to the country, as researchers reported that air quality had improved by 30% within this short amount of time and there was a drop in the number of deaths caused due to respiratory and cardiovascular diseases (Qin H. & Whitney M., 2021). These restrictions were however short lived and they were released with the ending of the games in Beijing.

It took five more years post the 2008 Beijing Olympics, for the state to officially declare a nation wide plan to address the impacts of pollution. This plan included improving environmental regulations, enhancing efficiencies of the regulatory authorities, relocating highly polluting factories and power plants, providing subsidies to farmers to stop burning agricultural waste, etc. These measures had a lasting impact on the country, as air quality amongst the most polluted cities in the country dropped by 35% between 2013 and 2017 (Qin H. & Whitney M., 2021). While this was a significant progress made by the state and its actors, with the sheer size of the country and density of the population, China still had a long way to go in terms of addressing air pollution.

It has been reported that the country faces atleast 1 million deaths every year due to poor air quality (Qin H. & Whitney M., 2021). The country has taken actions in the facets that are usually easy to address in terms of poor air quality, and future actions for the country will prove challenging, as China is a growing power in today’s economic and financial market and addressing pollution concerns would mean that China would need to make difficult decisions that would require robust implementation by the state actors. This could have an impact on their growth as development frameworks would now also have to consider environmental restrictions rather than mindlessly developing without concern on the sustainability of the land and resources, as well as foregoing the health of its citizens.

Sources of air pollution in China

At the rates of growth that China has been through in the past several decades, it is not a shock that the country’s air quality has been decimated in the process of becoming a global power. Below are some of the contributing factors to the poor air quality in the country: 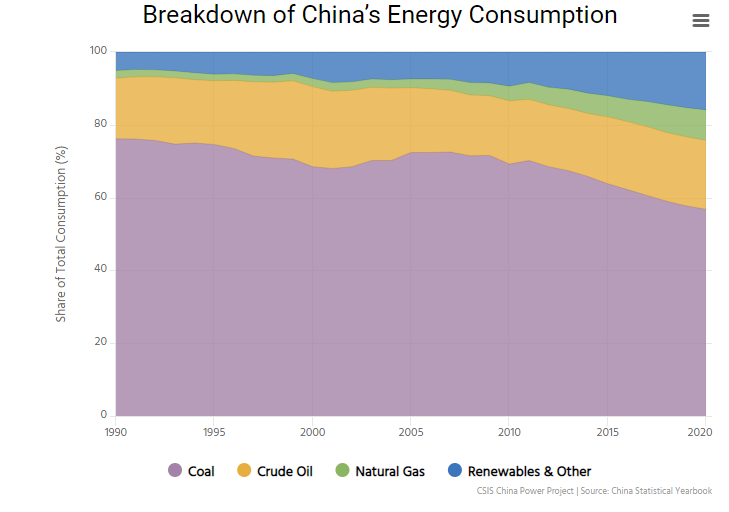 China has made many changes and implemented several frameworks for better air quality. The results could be observed when it was reported that China observed its lowest PM2.5 reading on record in August 2019. If the efforts taken by the state continue at this rate of efficiency, Beijing will be able to come out of the list of the most polluted cities in the world. Following several climate agreements like COP26, and global efforts, the country has agreed to reduce atleast 1.8% of its coal usage in power plants within the next 5 years. While China has reduced approximately 17.4% of the coal it has been using in the past 15 years up until 2020 and reduced upto 6.67 billion tonnes of CO2 emissions between 2006 and 2020 (Reuters, 2021).

China is the world’s largest source of greenhouse gas emissions and thus needs to take adequate steps to reduce its contribution towards global warming before we hit peak by 2030. These efforts are moving towards achieving Carbon neutrality by 2060. Senior climate advisor with Greenpeace in Beijing, Li Shuo was quoted the following (Reuters, 2021),

“China has built a lot of coal-fired projects and is very good at constructing coal plants and making them efficient, which means we have picked up pretty much all low hanging fruit of making existing coal feeds very efficient.”

However, it is not going to be enough to increase the efficiency of coals and other fossil fuels. Improving air quality and reducing the drastic impacts of climate change asks us that we completely stop using fossil fuels globally, to completely get rid of emissions that increase the vulnerability of the planet to environmental disasters. The country has decided to take several drastic measures including shutting down power plants that are not able to upgrade into energy-efficient practices or change their fuel sources.

“The level of coal use is already set once it is launched unless plants invest huge money to upgrade it. So China’s average efficiency target could be slowed to achieve if there are no new units with higher efficiency continuing to join the power fleet”

Therefore, it is a tough side to pick for state actors as economic development is key to the sustenance of any country. But does China have the capacity to change its gears on its way to becoming one of the world’s superpowers while minimizing the impact on the climate and citizens’ health? This is something that we will need to wait and watch for as state actors make decisions choosing between different kinds of future for China and its citizens.

In January 2017, China pledged to spend 367 billion USD on renewable power generation projects such as solar, wind, hydroelectric, nuclear, etc. However, various reports show that China has in fact reduced its investment in the renewable energy sector by 8% since 2019, which casts doubts into the pledges made by the country (ChinaPower, 2020). A report published by the International Energy Agency showed a massive rebound on the demand for coal in 2021, by 2.6% and the highest demand being in China, followed by India and other countries in South-Eastern Asia. Therefore, with all the promises made, China would still be a major contributor to green house gas emissions.

At this point however, state actors would probably target more smaller sources of air pollution including vehicular emissions, as the state has begun to enforce its sixth stage of the motor vehicle emissions standard framework, which requires vehicles to have efficient filtering systems for their exhaust gases, thus reducing the volume of pollutants from vehicles. The government has also begun to address the need for reduction of usage of fossil fuels in households. In October 2018, the government introduced a new framework that replaces coal-powered heaters with electric and natural gas powered systems, in approximately 1.2 million homes. Which is an insignificant number considering the population of the country. However, the policy had to be soon reversed following a shortage of natural gas.

Similarly, the country has introduced various schemes and frameworks, but have not effectively implemented them, causing these policies to be completely stopped or paused midway until a better solution can be found. At the current rates of emissions and China’s actions everyday, it is doubtful whether the country would meet its global commitments of reducing emissions.

What are the average daily values of air quality in Beijing?

What are the average daily values of air quality in Shanghai?

Other FAQs about Air Quality that you may be interested in.

Is LA Smog good or bad?

How can you improve indoor air quality?

No comments to show.